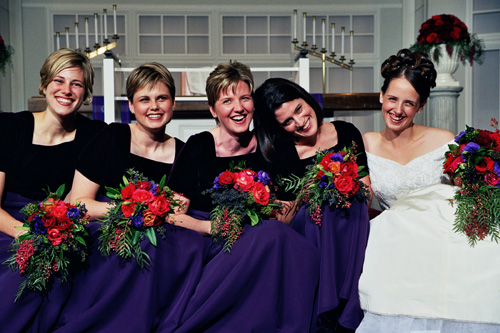 I, like Pebbles Flintstone and Cinderella, am an only child.

Everyone thinks only children are spoiled, but it’s not at all true; my parents bathed me in tap water and everything.

I do have to concede that I enjoyed some damn good birthdays and Christmases, though being the product of a broken home didn’t hurt in that department, either. I went to camp every summer for a month each time (my friends called it Camp Condo, but a lot of them were those freaks who like to wander around the wilderness carrying canoes on their heads, so you have to take their assessment with a grain of salt). My bedrooms were pretty, my clothes were pretty, and the places my parents took me on vacations were pretty. I regularly attended symphonies and plays and musicals, was encouraged at adult dinner parties to share my ignorant adolescent opinions on a range of subjects, and my parents never called me by the wrong name.

I would have willingly sacrificed the material trappings of only childhood (though not the privilege of pontificating at parties) for a couple of siblings.

I know plenty of Onlies who didn’t mind their solo gig and even a few baffling weirdos who seemed to love it, but I would have willingly sacrificed the material trappings of only childhood (though not the privilege of pontificating at parties) for a couple of siblings. Obviously, if my parents had only been ABLE to have one child, then I wouldn’t be whining right now (or would at least be whining about something else), but there were no real impediments to their conceiving another child other than the fact that they could barely stand to be in the same room at the same time. So okay, I understand. Anyways, by the time I arrived it was already too late, because I wanted OLDER siblings, not some annoying brat who would take all the attention away from my mediocre clarinet playing and practically inedible homemade éclairs. I know, I know, that’s totally something an only child would say –see what they did to me?

My friend Julie has accused me more than once of romanticizing siblings. Not true –why shouldn’t I assume that any big brother of mine would be a lot like Albus Dumbledore (only without the late-adolescence power obsession)? For my fantasy sisters, I’m less fanciful; Cate Blanchett and Nigella Lawson would do just fine. Really, all I’ve ever wanted was a brother who would tell me which of his gorgeous, thoughtful, brilliant friends to date and sisters who would share their amazing clothes and crush my enemies.

I have always thought of siblings as a kind of peer relationship insurance policy. It’s expensive, but you’re not denied based on your history of self-destructive, irritating behavior and someone will always make them pay if they try to opt out. Friends, of course, are more like stocks and bonds –the shortest-term ones are the highest risk, and all you can do if the bottom falls out is have a stiff drink and try to absorb the loss. Sisters and brothers can’t throw you away, even if they’re tired of your intensity or your whining or your complete inability to handle violent movies. They know they’re going to have to face you at Thanksgiving or Mother’s Day or at least next summer at the cabin, so they have to keep trying. They HAVE to.

I have always thought of siblings as a kind of peer relationship insurance policy.

I don’t have insurance; nobody in my life has to put up with my shit. My darling Julie did not have to come over and help me clean my house when I returned home after a weekend away at my cousin Kyle’s memorial service to dead flowers on the counter, laundry everywhere, dishes in the sink.

My cousin Jessica did not have to blaze all the way down to Mayo Clinic from Minneapolis to deliver a salad and giant piece of cake to Caroline’s hospital room, where I was stuck alone with my three-year-old, waiting for her to have a massive seizure so we could figure out where it was coming from. My friend Michele did not have to call my favorite bakery (which doesn’t deliver) and talk them into delivering a huge box of pastries (she made sure to buy only the stuff that would last several days) to my house before Caroline’s surgery.

My friend Mary does not have to call me every time things go radically south in my life and tell me exactly what she would do, step by step, to take care of me if she were living in Minneapolis. My friend Betsy does not have to sit on the phone with me every Thanksgiving and Christmas, going over the WHOLE menu, telling me the best way to roast asparagus, cook bacon (I can never do it right), or tweak the recipe for her mother’s chocolate cake, which is my perennial birthday cake, to make it exactly right.

None of them have to do anything (that’s not at all an exhaustive list of my phenomenal friends or the beautiful things they’ve done for me, by the way –if you weren’t mentioned this time, you can bet you will be eventually). They don’t have to keep me around, they don’t have to listen to me lecture and cry and long for the jerks who don’t care whether I’m in their lives or not. They just do because they want to, because they love me and they know I love them and usually try give as good as I get.

See? It’s not the same. If I had brothers and sisters, the insurance, they would be expected to take care of me by doing what insurance will usually do for you –the bare minimum. Maybe they would do more, but they could just as easily do only what they were obligated to do, resent it, wear me down, demand proof of my claim. Stocks aren’t like that — choose good strong ones and they’ll always pay because that’s how it’s set up. Once in a while, I’ll invest a lot of energy and heart into a relationship that seems good, strong, promising. But they get busy or bored and drift away, run away, throw me away. It hurts; every time it happens with a friend I really value, I wish I had the insurance. I wish they didn’t have the option to take everything I’ve given them and run. I wish I could MAKE them stay.

But I don’t really. Obligation is not a good insurance policy. I want my investments to value me as much as I value them, to strive always for loyalty and transparency and innovation. When they don’t, I have a stiff drink and absorb the loss. Then I call my stocks and bonds –a good portfolio has always been the best insurance.