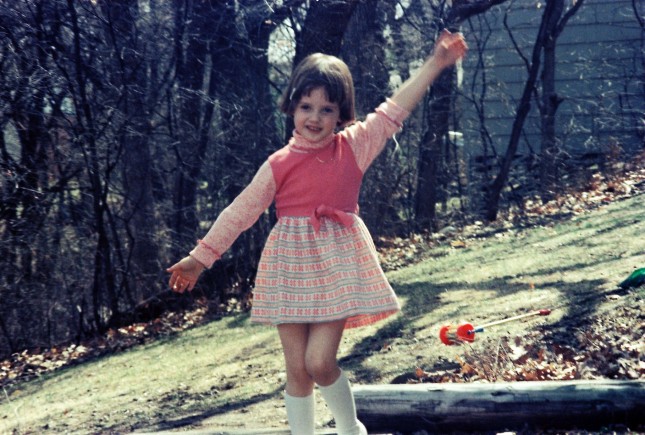 You probably never did this, but when I was a little girl, I sucked my thumb. Long after other kids had quit, I was still doing it. Losing patience, my mom tried painting my thumbs with some gross-tasting liquid to make me stop. Instead, I sucked my poisoned thumbs and wept with indignation. She put me on incentive programs, offered me prizes, rolled her eyes, issued dire warnings about other kids not wanting to be friends with me, but it was all in vain. I was an only child and prone to tears – I wasn’t about to surrender my only reliable source of comfort for a Barbie doll or some vague threat of social isolation.

So my mother told me about the Thumbsucking Witch.

A witch who pinched me just at the moment I had achieved a temporary and uneasy peace? This was my mother’s idea of “good-natured” and “friendly?” What, then, qualified as evil? These were the kinds of questions that kept me sucking my thumb.

According to my mother, I couldn’t see the Thumbsucking Witch but she could see me. Was she invisible or just hiding in the room somewhere? Could she see me when I was in the bathroom? The closet? Was anywhere safe? Was she ever NOT watching me?

I believe both the Cold War and my mother’s fascination with James Bond spy movies provide relevant context for my surveillance paranoia.

I believed in the Thumbsucking Witch. I didn’t believe she was nice – I was no Pollyanna—but I believed she existed and followed me everywhere, waiting for me to screw up so she could punish me. This, by the way, is a pretty typical GenX origin story.

Anyway, I met her. I met the Thumbsucking Witch late one night when I couldn’t sleep. She poked her head and torso through my window, wearing standard-issue pointy black hat and billowing black robes, though no wand — curious.  Nothing about her was friendly. She stayed for about half an hour, shaming and reprimanding me for my disgusting, babyish habit. Again and again I would bring my thumb to my lips and then force it back down under the covers, delirious with fear and longing.

When the witch flew away, having first extracted my trembling promise to quit sucking my thumb and threatening to return if I didn’t, I climbed down from my playhouse bed and ran to my parents’ room. I had been right the whole time; the Thumbsucking Witch was not nice. How dare my mother lie to me about something so fundamental? How dare she?

Mom was unimpressed with my hysterics. “Marta, the Thumbsucking Witch isn’t real. I made her up so you would stop sucking your thumb. You must have just had a bad dream.”

I would have none of it. “She was in my window, she was MEAN and she scared me.” I can only imagine what this scene must have been like for my mother, who had a Master’s degree in psychology and had just graduated from law school. How to counsel such an irrational client?

My mother was not the type to indulge drama and sent me back to bed, bawling I’m sure, afraid to suck my thumb and yet needing it to calm down. I wanted to believe that my mother was telling the truth, that the Thumbsucking Witch was just a character she had made up to get me to quit a bad habit — it made sense — but I had seen the Thumbsucking Witch. I had heard her.  I knew she had visited my room and frightened me. Didn’t I?

So odd, the things that cross your mind as you listen to the news.

I hope you’re well and happy, ready for whatever comes next. I, for one, am wishing for a dull,  quiet year, but it doesn’t look like we’re going to get one. Never mind … we have each other.

In love and solidarity,
Marta

2 thoughts on “The Thumbsucking Witch”